Back in 2105, the Windows store decided to unpublish VLC Remote after I submitted an update.

I ran a competition to try to figure out why they had banned it. This attracted some media attention which ultimately resulted in a  Windows Developer Platform manager contacting me. He quickly got some people on the case and the app was restored.

About three weeks later, I needed to update the description. The same thing happened again. Again, the same chap kicked some butt in the store and got the update approved.

A year or so later, and I have had a request from Microsoft to fill in their age rating questionnaire.

Of course – this requires submitting a new update, and of course the exact same problem is hitting. (Note – the app, and its description and screenshots are completely unchanged)

Your app and its associated metadata must accurately and clearly reflect the source, functionality, and features of your app.

The app name does not accurately represent the app.
For more information see Windows Store Policy 10.1 at http://go.microsoft.com/fwlink/?LinkId=620446.

This time, I haven’t had a response from the program manager (he has probably moved on in disgust)

I have resubmitted with a link to the original story, but have just had a somewhat meaningless response

Thank you for the follow up and I am showing that app under that account. Now I also reviewed over the listing and I would suggest contacting report app from the email below as they will be bale to assist you directly on the certification.

If you have any questions or concerns, please respond to this e-mail and we will work to resolve them as quickly as possible.

I guess Windows Store is dying, and Microsoft just want to clear out the few remaining apps. 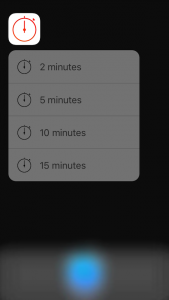 If you’re using Mac OS, and you’re updated to the latest version, then VLC Streamer now offers a way to right click (or cmd+click) on a movie in the finder to add it directly to VLC Streamer. 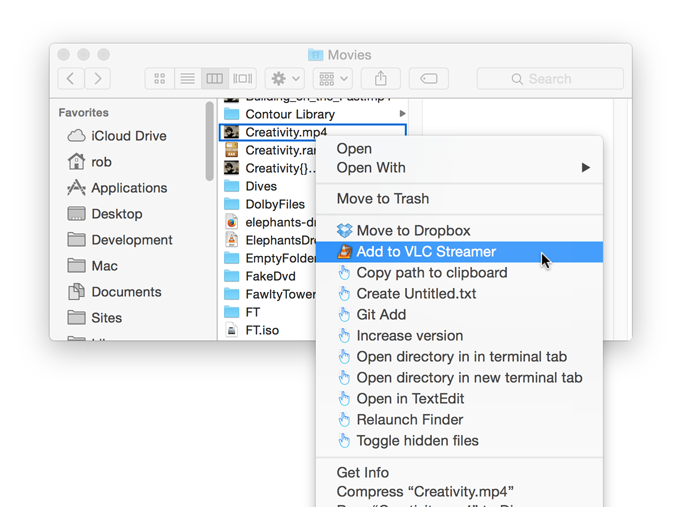 The new option is in the settings tab. 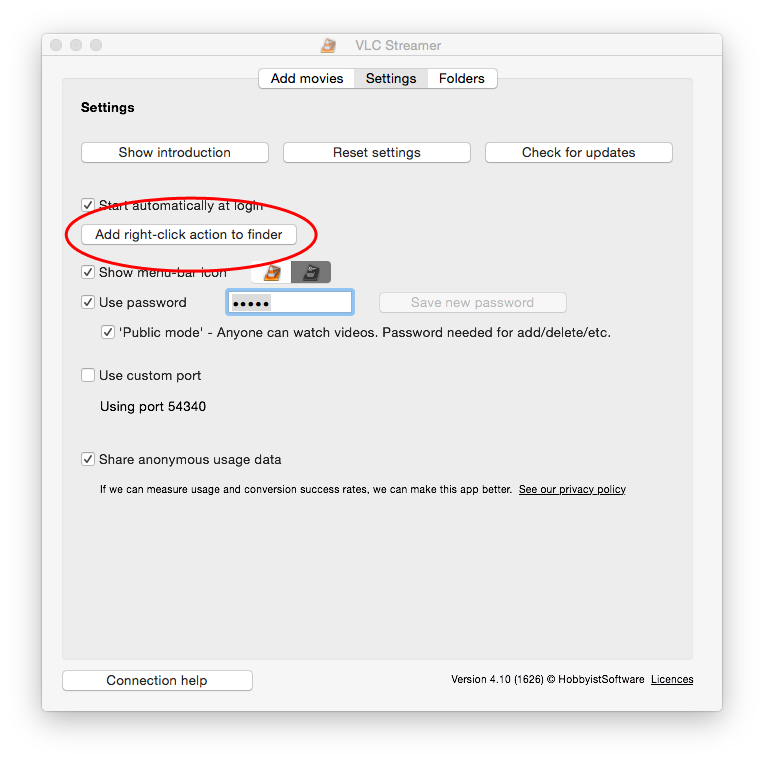 It makes use of my newish (free) app Right Click Booster.

When you click to add the right-click item, you’ll be prompted to install Right Click Booster if you don’t have it already – and taken to the Mac App Store to download it for free.

VLC Remote and VLC Streamer rely on you to translate them into your native language.

The site isn’t really mobile-friendly, so you probably want to do this on your laptop.

I’m always happy to provide free copies if you help with translations – email me at rob @ hobbyistsoftware.com if that would help.

I get asked about Chromecast a handful of times a month.

I have a Chromecast to test on, and I love the concept. I’d love to be able to support it with VLC Streamer.

In my testing – it fails to play most streams (streams that play fine on Android, iOS and VLC).

I wrote in the forum a couple of months ago with more details for the technically minded.

I assume that Chromecast will get better over time, and I’ll give it a try again in a few months.

Unfortunately, my expectation of Chromecast is not necessarily one that the Chromecast team share. I expect Chromecast to ‘just work’.

If streams play on iOS and Android, then I don’t expect to have to battle to format them specially for Chromecast. Equally, I expect integration to be simple rather – whereas the Chromecast team expect me to implement a whole complex system of searching and communication.

For the most part – the Chromecast team response has been to refer to state that vlc streamer steams don’t meet the required specification and that any crashes are therefore not Chromecast’s problem.

You can see the lively discussion here. It’s one of the most +1’d posts on the ChromeCasst developer forum.  I think that means I’m not the only frustrated developer.

As a Chromecast owner, I’m not sure what you can do. The fact is that Chromecast is hard to integrate – and doesn’t do a good job with HLS streams. Until the Chromecast developers fix that – VLC Streamer won’t be supporting Chromecast.

We just released an update of VLC Remote that supports VLC 2.1

We are trying a new approach to the windows store; Instead of keeping a free version and a paid version, we are switching to one version – but with a free trial.

There is no requirement to upgrade to the full features, and if you don’t then it will simply behave like the free version after your trial period.

If you already have the paid version:

You’re all set. You don’t need to do anything except update to the latest version.

If you are using the free version:

You don’t need to pay for anything, but you do need to switch to the new version.

You can try the paid features for free, and if you don’t like them enough to pay after the trial, you still don’t have to pay (but you’ll be reduced back to the free version features)

If you don’t update, the free version will continue working as it does now – but it won’t support VLC 2.1 when that arrives.

Thanks for your support – I hope things will be a bit simpler after the switch.

We’re just putting the final touches on our update to support VLC 2.1, but it will take a few days for Microsoft to approve them.

Please watch this space – don’t upgrade quite yet…

We have now released a full version of VLC Streamer – thank you to everyone who has helped during the beta testing.

The beta build will expire in a few days, and it will ask you to upgrade. At that point, you can either keep the free version, or get the paid version.

The free version is ad-supported, and it also disables the ability to copy movies to the device for watching later. The full version has no ads, and you can copy movies over.

As a way of thanking our beta users, we’re keeping the price at $1 initially to let you switch over to the full version for a thoroughly reasonable price!

You can get the full version here: