We’re ready to go, but there are a few things you need to do to make sure everything works properly

That should lead to a smooth upgrade.

One of the updates in VLC 2.1 is that this should be the last time you need to run the setup helper – the next update should keep the settings that were previously lost on each update.

VLC Remote can do a lot more than volume and track control. Swipe up on the cone in the main view and you’ll find the advanced controls.

From here, you can swipe to the equaliser, track control, dvd controls, and more. 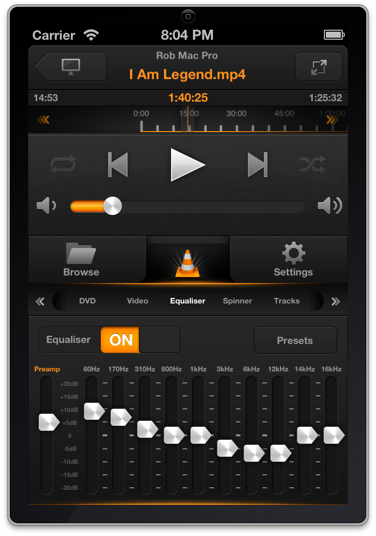 That made sense to me when the iPad was new, and it took me a lot of work to build iPad support, but it doesn’t seem right any more.

As a result, VLC Remote will now work on the iPad and also the iPhone.

This release also brings the new UI to the iPad with the advanced controls appearing as a (collapsable) sidebar on the right. New features from the iPhone version like album art and the graphical equaliser are now available on the iPad too.

Whether you bought the iPhone version or the iPad version, you can now use it on both devices. You’ll get an interface which has been optimised for the device you are using.

In an ideal world, I would now merge VLC Remote (for iPhone) with VLC Remote for iPad as they both work on both devices.

Unfortunately Apple doesn’t have a way to do this, so I’ll keep both versions running.

I’ll change the name on the iTunes store so that the iPad version appears as ‘Legacy VLC Remote for the iPad’. This should encourage new users to purchase the ‘iPhone version’, but VLC Remote will keep on working just fine whichever version you bought.

I have guessed at some questions you might have…

Will I still get updates?

Why are you changing the name on iTunes?

Since both apps are now the same, I’m using the name change to encourage new buyers to just get the standard VLC Remote.

Do I have to buy the new version

Definitely not. If you have already paid for the iPad version, you can stick with that and it will work on the iPhone and iPad.

I already bought both versions

That’s great – thank you. You can use either one on any of your devices.

Can I switch to the ‘iPhone’ VLC Remote

Sadly not. Apple doesn’t provide any way for me to switch people between versions. If they do in future, then I’ll move everyone over.

I still have a question…

Please contact me through the settings page. I’ll be happy to help.

Thank you for supporting VLC Remote. I do appreciate it.

Update: VLC 2.0.3 has been released for Mac OS now – please update to this if you are getting fullscreen control problems.
—-

Mac users: If you updated to VLC 2.0.2, then you’ll notice that there is a bug with the fullscreen control.

The http interface (which VLC Remote uses) simply isn’t working for fullscreen. I have contacted the VLC Mac developers and they have fixed this (Thank you!). They are planning a mini-release in the next few days, or you can download the nightly version from

thanks again to the VLC team for such a swift fix.

NB: these links are to a non-released version of VLC, so the standard use-at-your-own-risk warnings apply!

inevitably, there were some decisions to be made about what controls should be there, and how to present them. My goal was to make VLC Remote easy to use, but with powerful features readily accessible.

Or in the wonderful words of Einstein – ‘As simple as possible, but no simpler’

One thing that went was the separate stop and pause buttons. Stop mostly exists from the days of VHS when it mattered whether your movie was stopped (the head stopped spinning against the tape), or paused (the head was spinning, and your tape was wearing out).
With digital media, it doesn’t really matter whether the player is paused. That’s why a lot of players save the space and get rid of it completely.

Having said that – some people like the finality of a stop command which says ‘I’m never coming back to this track!’

At the moment, you can double-tap on the play/pause button to stop. If I get a lot of requests to bring back the stop control as a separate button – I will.

Another thing we got rid of was the separate playlist view – we figured we could just use the playlist in the main display.

The downside of this is that the delete-track controls are kinda hidden. They’re still there – but you have to know what you are looking for.

If you swipe left on any item in the playlist, then you’ll see a delete control for that item. You will also see the ‘delete all’ button at the top left of the screen.
I’ll probably add a tutorial element so that people learn about this. I will also add a delete option to the ‘share’ menu in the next revision. I’m open to suggestions on how to make it more obvious.

I hope this makes sense – you can email me from within the app if you have any comments, or you can post at the forum or on facebook.

VLC Remote 6.00 is a major new release with lots of new features. It just went live in the App Store.

With such a major update, there will probably be some minor issues that need to be fixed despite a lot of beta testing – hold tight for 6.01 if you don’t want to take any chances.

I hope you enjoy it!

VLC 2.00 has been approved for release, so the new version should be hitting the front page of Videolan.org very soon.

Please remember a few things when you upgrade:

1) Make sure you have the latest version of my setup helper. The older versions won’t correctly configure VLC 2.00
2) You will need to run the setup helper again when you upgrade – this is because some of the configuration settings get wiped with each upgrade.

On Windows, you need setup helper version 4.20, on Mac version version 3.30.
Click ‘Check for updates’ in your current setup helper or get ’em here.
http://HobbyistSoftware.com/vlc

If your browser is giving you an old version, then clear the cache or try in a different browser!

Perhaps more exciting is the completely new design that I’m working on for VLC Remote. It will take advantage of some new features available in VLC 2.00

You can get some sneak peaks at the VLC Remote facebook page http://www.facebook.com/VLCRemote

I just released an update for iBrowse which does two things.

I use this when I’m browsing a news site. I go to news.bbc.co.uk, and I can now click and hold on a link, then select ‘open in background tab’. That story starts loading, and I pick a few other stories to load in the background.

Now I switch to coverflow view and swipe to one of the stories (which has probably already loaded by now).

iBrowse is available as ever at the App Store.

When I released Off Remote, I thought people would use it to turn off their media centre computers, and their home-office computer without having to get out of bed or leaving the sofa.

I’m sure it is used for that – but I found from my emails that people also use it to switch off their kids’ computers.

The new release makes Off Remote even better for this. You can now send a short message to the computer before you shut it down

‘It’s past your bedtime – save your work before I turn off your computer!’

You can also disable the ‘countdown’ message that used to appear as the computer was about to shut down. This gives you the upper hand if your kids were used to just clicking the ‘cancel’ button.

Of course – with great power comes great responsibility! Use with care…

Off Remote is available as ever at the App Store.

If you’d like to give Off Remote a try, you can get it right here: